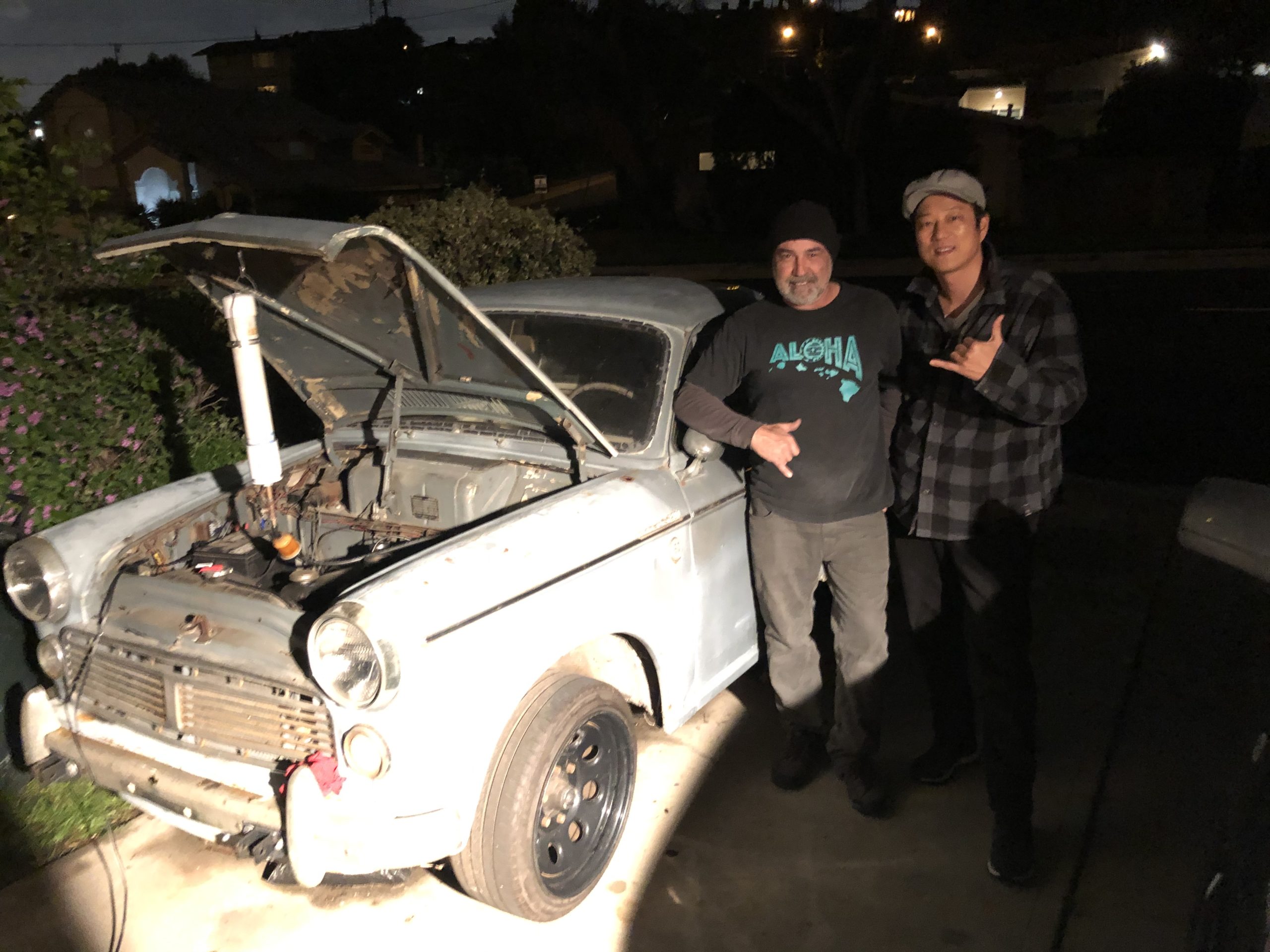 As you might have seen from Sung’s Twitter, he’s recently bought a new car. It’s a Datsun 320 that he’s lovingly named Oppa. Make sure you head over to Twitter to keep up to date with the build as Sung and his team progress with it.

But what does Sung look for when purchasing a new car? We had a chat with him to find out what his five most important considerations are when choosing the right car.

Origin story…it was only a week ago when @sungkang went to check out the Craigslist ad to buy #Oppa pic.twitter.com/ncP79JSTUF

1. Has it spent its life in California?

Where a car has lived for the majority of its life can make a huge difference to its mechanicals and bodywork, especially if it’s an old car. Since Sung loves his classic and retro Japanese cars, this is a major factor for him.

If the car has lived in California, you can relax when it comes to worrying about rust. As I’m sure you know, rust comes from a mixture of moisture and salt which eat through exposed metal. Thanks to California being such a dry and warm area, there’s little chance of the crippling phenomenon taking over your car’s metal.

On the other hand, if a car has spent a lot of time close to the coast, then the saltwater and sea air can wreak havoc on metal. It’s definitely worth looking at a car’s history to find out if you need to be worried about this.

2. Who are you buying it from?

I don’t know about you, but I can tell straight away if someone is genuine or not, and it greatly changes my own mood when it comes to making a fair and honest deal. We here never want to do someone out of their hard-earned cash, but how they respond to us, the buyer, makes an impression.

To start with, are they friendly? Do they ask you to come in for more of a chat? This is the perfect scenario because not only do you get to know them better, but also the background and story of the car. If you realise that they’re trying to hide anything from you, this would obviously put us off and make you start to wonder what else is being kept under wraps. When buying an old car, especially one that’s Japanese, it’s so important to check for rust. Take a magnet with you to check panels for filler. If it doesn’t stick, then it’s not metal and possibly a bodge job, so avoid at all costs.

Rust, and the cost of repairing it, can stop a project car in its tracks, even if it looks to only be on the surface. Every single car I’ve ever owned has been rusty, and every time I’ve thought it was on the surface. But sometimes it grows from the inside out. Take it from me, it’s not something you want to be chasing. Sung himself calls rust “cancer”.

Let’s not be stupid, we love modifying our cars, but you can never be sure what someone else has done, and the quality of their work. For that reason, it’s best to steer away from modifications of any kind, especially if you don’t know what you’re looking at (that includes me).

However, if the car is modified and a specialist garage that you know of and trust has done the work, you can always get in contact with them to inquire about the work, what was done, and when. But if you’re being extra safe, avoid.

Buying a stock car also means you can imprint your ideas on a blank canvas, meaning you can shape the car and the ideas behind the car however you see fit.

Oppa was lowered, but its previous owner retained its original parts to bring it back to stock height.

5. Have you produced a personal connection to the car?

Sung has one rule he sticks by: if he doesn’t come up with a name for the car by the time he leaves, he doesn’t go back to it. It’s this personal connection that sparks your love for it, and your eagerness to drive it. If this isn’t there, then it’s likely you could regret the purchase or, if you have more than one car, leave it to gather dust. That’s a waste when someone else could have fallen in love with the car themselves

This is possibly the most important on the list and doesn’t have anything to do with the quality or mechanics of the vehicle. If you love it, you’ll be willing to put up with the niggles and issues. That is what owning a project is all about, isn’t it?

Let us know below what you look for when you’re buying a car. Comment some suggestions in the comment box below…

Here’s the podcast to meet Oppa. Or get a taste for it below!

During our conversation w Bao Nguyen (@baomnguyen) director of @30for30 “Be Water”, Sung shares a moment where he got to hold and read a letter from Bruce Lee. Listen to the full podcast now. Link in bio or here https://bit.ly/30D41j8
.
.
.
.
#sungsgarage #sungkang #sungkangsta #baonguyen #bewater #espn #30for30 #brucelee #firstasianamericanactor #documentary ...

Open
Beautiful work by @dymepsi on the #98. And huge th

NEW PODCAST OUT! Sung & David got to chat w Bao Nguyen, the director of the recent ESPN @30for30 “Be Water” which explores the life and legacy of Bruce Lee. Link in bio or here https://bit.ly/30D41j8
.
.
.
.
#sungsgarage #sungkang #sungkangsta #baonguyen #brucelee #bewater #espn30for30 #podcast #whattowatch @therealshannonlee @baomnguyen ...

Open
Many thanks to @mzr_roadsports for giving us a vir

Many thanks to @mzr_roadsports for giving us a virtual tour of greatness. If you haven’t listened to the podcast and want to see some amazing 240z’s check it out now. Link in bio or here https://bit.ly/2Wn0Nz2
.
.
.
.
#sungsgarage #sungkang #sungkangsta #mzr #mzrroadsports #datsun #nissan #240z #datsun240z #carbuild #fairladyz #cars #carsofinstagram ...

Open
Some live clips of a great conversation with @baom

Open
Does anyone know what those stickers say? And chec

Does anyone know what those stickers say? And check out that air box. Make sure to check out Rahail’s 240z Gnose in our latest podcast.
.
.
.
.
#sungsgarage #sungkang #sungkangsta #240z #datsun #nissan #datsun240z #240zg #gnose #japanesestickers #airbox ...

Open
Thank you Yoshihiko Matsuo san. The man who was th

Thank you Yoshihiko Matsuo san. The man who was the design team leader who helped design the iconic 240z that many of us love today. You will be missed. Thank you!
.
.
.
.
#240z #fairladyz #Datsun240z #nissanfairladyz #yoshihikomatsuo #matsuosan #legend #Nissan #Datsun ...

Open
True legends of the import scene. We are so fortun